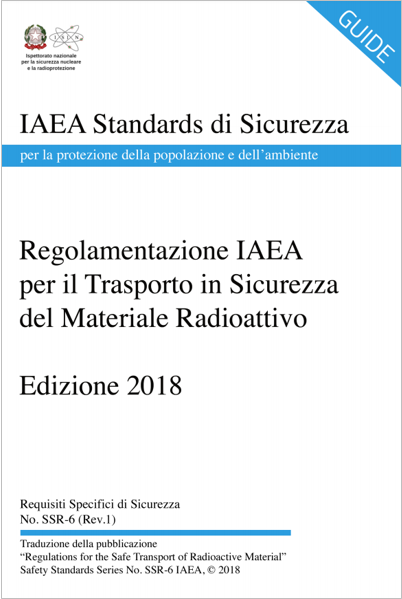 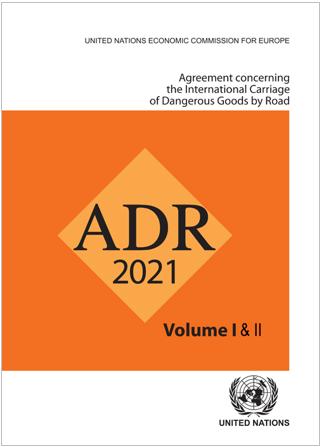 The European Agreement concerning the International Carriage of Dangerous Goods by Road (ADR) was done at Geneva on 30 September 1957 under the auspices of the United Nations Economic Commission for Europe, and it entered into force on 29 January 1968. The Agreement itself was amended by the Protocol amending article 14 (3) done at New York on 21 August 1975, which entered into force on 19 April 1985. The title of the Agreement was modified by the Protocol amending the title of the ADR adopted by the Conference of the Parties to the Agreement on 13 May 2019 and entering into force on 1 January 2021. As from this date the European Agreement concerning the International Carriage of Dangerous Goods by Road (ADR) will become the Agreement concerning the International Carriage of Dangerous Goods by Road (ADR). According to article 2 of the Agreement, dangerous goods barred from carriage by Annex A shall not be accepted for international transport, while international transport of other dangerous goods shall be authorized subject to compliance with:
- the conditions laid down in Annex A for the goods in question, in particular as regards their packaging and labelling; and
- the conditions laid down in Annex B, in particular as regards the construction, equipment and operation of the vehicle carrying the goods in question.
Nevertheless, according to article 4, each Contracting Party shall retain the right to regulate or prohibit, for reasons other than safety during carriage, the entry of dangerous goods into its territory. Contracting Parties also retain the right to arrange, by bilateral or multilateral agreements, that certain dangerous goods which are prohibited from carriage by Annex A be internationally carried, subject to certain conditions, on their territories, or that dangerous goods authorized to be carried internationally according to Annex A be carried on their territories under conditions less stringent than those specified in Annexes A and B.
Annexes A and B have been regularly amended and updated since the entry into force of ADR.

Structure of Annexes A and B

The Working Party on the Transport of Dangerous Goods (WP.15) of the Economic Commission for Europe’s Committee on Inland Transport decided, at its fifty-first session (26 30 October 1992), to restructure Annexes A and B, on the basis of a proposal by the International Road Transport Union (TRANS/WP.15/124, paras. 100-108). The main objectives were to make the requirements more accessible and more user-friendly so that they could be applied more easily not only to international road transport operations under ADR, but also to domestic traffic in all European States through national or European Community legislation, and ultimately to ensure a consistent regulatory framework at European level. It was also considered necessary to identify more clearly the duties of the various participants in the transport chain, to group more systematically the requirements concerning these various participants, and to differentiate the legal requirements of ADR from the European or international standards that could be applied to meet such requirements.
The structure is consistent with that of the United Nations Recommendations on the Transport of Dangerous Goods, Model Regulations, the International Maritime Dangerous Goods Code (IMDG Code) and the Regulations concerning the International Carriage of Dangerous Goods by Rail (RID).
It has been split into nine parts, but still grouped under two annexes to align with the wording of article 2 of the Agreement itself. The layout is as follows:
- Annex A: General provisions and provisions concerning dangerous articles and substances
- Part 1: General provisions
- Part 2: Classification
- Part 3: Dangerous goods list, special provisions and exemptions related to limited and excepted quantities
- Part 4: Packing and tank provisions
- Part 5: Consignment procedures
- Part 6: Requirements for the construction and testing of packagings, intermediate bulk containers (IBCs), large packagings, tanks and bulk containers
- Part 7: Provisions concerning the conditions of carriage, loading, unloading and handling
- Annex B: Provisions concerning transport equipment and transport operations
- Part 8: Requirements for vehicle crews, equipment, operation and documentation
- Part 9: Requirements concerning the construction and approval of vehicles Part 1, which contains general provisions and definitions, is an essential part, since it contains all definitions for terms used throughout the other parts, and it defines precisely the scope and applicability of ADR, including the possibility of exemptions, as well as the applicability of other regulations. It also contains provisions concerning training, derogations and transitional measures, the respective safety obligations of the various participants in a chain of transport of dangerous goods, control measures, safety advisers, restrictions for the passage of vehicles carrying dangerous goods through road tunnels and transport of dangerous goods security.
Central to the use of the restructured ADR is table A of Chapter 3.2 which contains the dangerous goods list in the numerical order of UN numbers. Once the UN number of a specific dangerous substance or article has been
determined, the table provides cross-references to specific requirements to be applied for the carriage of that substance or article, and to the chapters or sections where these specific requirements may be found. Nevertheless, it should be borne in mind that the general requirements or class specific requirements of the various Parts have to be applied in addition to specific requirements, as relevant.
An alphabetical index which indicates the UN number assigned to specific dangerous goods has been prepared by the secretariat and added as table B of Chapter 3.2 to facilitate the access to table A when the UN number is unknown.
This table B is not an official part of ADR and has been added in the publication for easy reference only.
When goods which are known or suspected to be dangerous cannot be found by name in any of tables A or B, they have to be classified in accordance with Part 2, which contains all relevant procedures and criteria to determine whether such goods are deemed to be dangerous or not and which UN number should be assigned.

ADR is an Agreement between States, and there is no overall enforcing authority. In practice, highway checks are carried out by Contracting Parties, and non-compliance may then result in legal action by national authorities against offenders in accordance with their domestic legislation. ADR itself does not prescribe any penalties. At the time of publishing, the Contracting Parties are Albania, Andorra, Austria, Azerbaijan, Belarus, Belgium, Bosnia and Herzegovina, Bulgaria, Croatia, Cyprus, Czechia, Denmark, Estonia, Finland, France, Georgia, Germany, Greece, Hungary, Iceland, Ireland, Italy, Kazakhstan, Latvia, Liechtenstein, Lithuania, Luxembourg, Malta, Montenegro, Morocco, Netherlands, Nigeria, North Macedonia, Norway, Poland, Portugal, Republic of Moldova, Romania, Russian Federation, San Marino, Serbia, Slovakia, Slovenia, Spain, Sweden, Switzerland, Tajikistan, Tunisia, Turkey, Ukraine, United Kingdom and Uzbekistan.
ADR applies to transport operations performed on the territory of at least two of the above-mentioned Contracting Parties. In addition, it should be noted that, in the interest of uniformity and free trading across the European Union (EU), Annexes A and B of ADR have also been adopted by EU Member States as the basis for regulation of the carriage of dangerous goods by road within and between their territories (Directive 2008/68/EC of the European Parliament and of the Council of 24 September 2008 on the inland transport of dangerous goods, as amended). A number of non-EU countries have also adopted Annexes A and B of ADR as the basis for their national legislation. 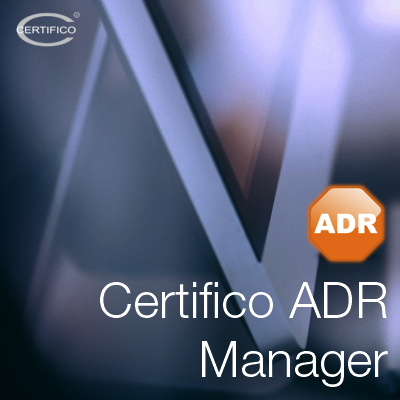 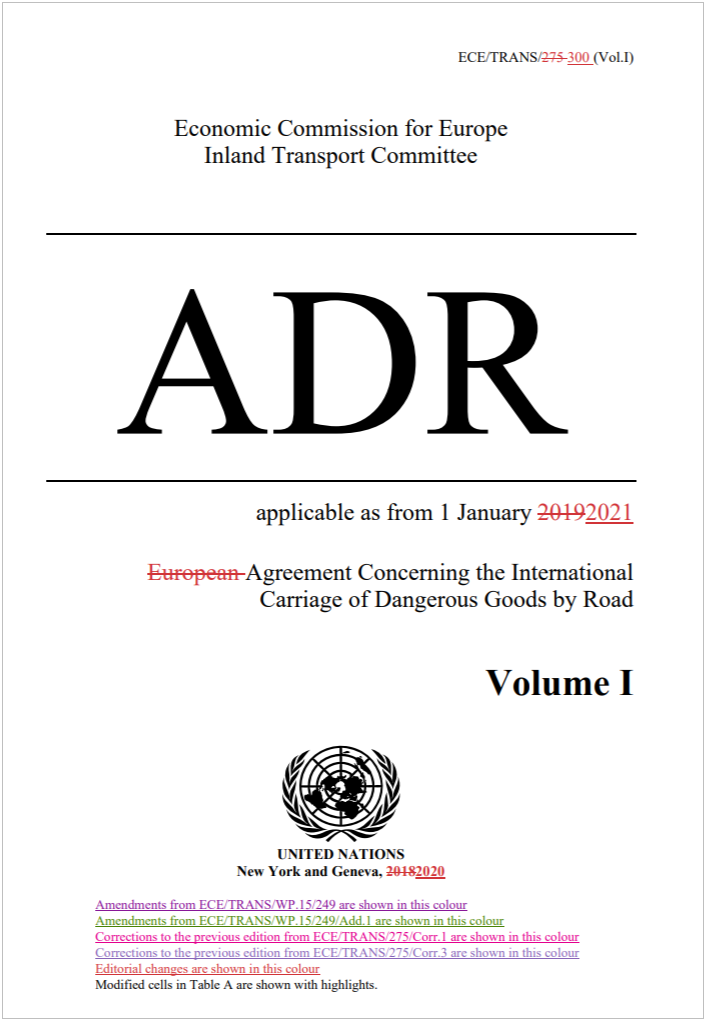 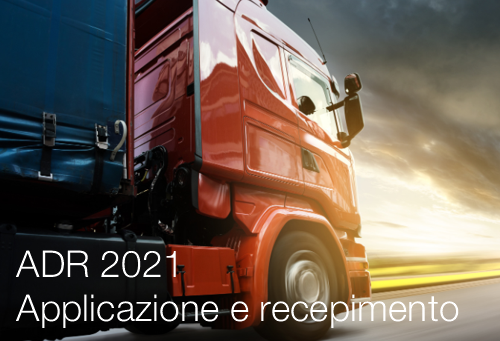